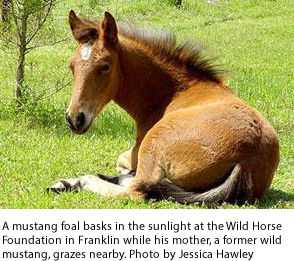 “Congress finds and declares that wild free-roaming horses and burros are living symbols of the historic and pioneer spirit of the West,” states a congressional declaration dated Dec. 15, 1971.

Yet, in a surprising and highly protested move, Congress recently passed a bill that allows for the slaughter of the American wild mustang reportedly effective Wednesday, Jan. 5.

The rider changes the Wild Free-Roaming Horse and Burro Act of 1971, splitting the once federally protected wild horses and burros into two categories, those over 10 years old and those that have been to a minimum of three unsuccessful adoptions. In accordance with the rider’s language, the federal Bureau of Land Management (BLM) is authorized to sell these animals to the highest bidder without regard for the buyer’s intentions.

The rider was reportedly passed without opportunity for public hearing or debate. President George W. Bush signed it Dec. 8.

Organizations such as the American Horse Defense Fund, the American Humane Association, the Humane Society of the United States and the International Society for the Protection of Mustangs and Burros that represent over 12 million members have labeled this legislation a tragic error.

According to Ray Field, director of the Wild Horse Foundation of Texas, the BLM has already approved a lump sale of over 8,300 wild horses and burros to a single buyer. Field said that the best price given at a sale barn or slaughter sale would be 10-12 cents per pound, which averages less than $100 per horse. The sold horses could then be transported to one of three U.S. slaughterhouses, two of which are in Texas, for processing and shipment to countries in Europe and Japan, where horsemeat is considered a delicacy.

“Selling off our American heritage has now been given a price,” said Field.

Prior to these actions, the wild mustang and burro were federally protected thanks to the efforts of Velma Johnston, otherwise known as Wild Horse Annie.

Johnston pioneered a one-woman crusade against ranchers and licensed commercial hunters who harvested and slaughtered the wild horses. The Wild Horse Annie Act was passed in 1959, banning the use of airplanes to hunt wild horses.

In 1971, with Johnston at the helm, the Wild Free-Roaming Horse and Burro Act was passed, stating, “It is the policy of Congress that the wild free-roaming horses and burros shall be protected from capture, branding, harassment or death.”

In 1987, a Federal Court of Appeals ruled that the BLM could not give title to a person whom they knew intended to sell the horse for slaughter. Instead, in an effort to prevent the overpopulation of the wild horses and preserve the public lands on which they grazed, the horses were gathered and held at facilities for training and adoption placement.

The mustang was featured in last year’s critically acclaimed film “Hidalgo,” the story of Frank Hopkins and his favored pinto stallion as they raced across the Arabian Desert in a 3,000-mile endurance ride.

Hopkins and Hidalgo completed the ride in 68 days; the second rider to touch the finish stone came in 33 hours later.

In an interview with Western Horseman Magazine in 1969, Hopkins said, “You can’t beat mustang intelligence in the entire equine race. These animals have had to shift themselves for generations. They had to work out their own destiny or be destroyed.”

Now that politics has become a major player in the plight of the mustang, it appears as though its fate will no longer depend on its survival and evolutionary instincts, but rather the policy makers in Washington.

An ongoing debate over grazing land has encircled horse, environmental, animal activists and cattle ranchers for years. In 2003, the National Cattlemen’s Beef Association reportedly proposed legislation to authorize the immediate sale of unadopted mustangs and to make federal agencies pay for land damaged by feral horses.

In a letter to Sen. Burns pleading for the removal of Rider #142, Executive Director of the Wild Mustang Foundation Mary L. Dobbs said, “Senator Conrad Burns proposed Rider #142 allowing the BLM to sell wild horses to slaughter, providing more grazing for cattle though federal law mandates protection for wild horses. Currently, there are 150 steers to every one wild horse on federal land. Only two percent of the beef eaten in the U.S. comes from public lands ranching. According to the [U.S. Government Accountability Office (GAO)] report in 1990, wild horses were not the cause of declining rangelands, it was attributed to overgrazing by cattle.”

According to Tom Pogacnik, Director of the BLM in California, somewhere between 6,000 – 8,000 wild horses and burros sanctuaried in northern Oklahoma and southern Kansas will be affected by the new law. It remains undetermined how many more may be subject to the mass sales from gathers in Nevada, Utah and Wyoming.

“We have yet to develop implementing policy,” said Celia Boddington, public affairs person for the BLM in Washington. “[The rider] is subject to internal review. The public both expects and deserves such analysis.”

Still open to exploring other alternatives, Pogacnik said, “We’re waiting to hear how Washington is going to interpret the law. We’re trying to find homes for these animals.”

In a seemingly hypocritical and cruel twist of fate, Dec. 13 was recently designated as the National Day of the Horse.